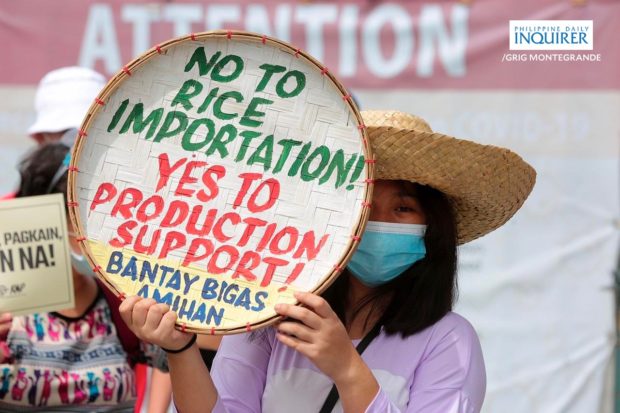 FILE PHOTO Peasant and fisherfolk women, advocate groups protest at the Department of Agriculture headquarters, calling on the government for immediate aid and production subsidy as alleviation on the impact of the pandemic. INQUIRER/GRIG C. MONTEGRANDE

MANILA, Philippines — The proposal to declare a state of emergency in the agriculture sector should be studied and discussed first, two senators said Monday.

Senators Joel Villanueva and Grace Poe were reacting to the proposal of the Philippine Chamber of Agriculture and Food Inc. (PCAFI) to President Ferdinand “Bongbong” Marcos Jr., who serves as concurrent chief of the Department of Agriculture (DA).

(We are ready to work with the Marcos administration regarding the proposed declaration of state of emergency for the agriculture sector, but we need to study first the proposal of the PCAFI.)

Villanueva said several questions have to answered regarding proposed declaration, such as the timeline and targets of the state of emergency.

With the opening of the 19th Congress, he said the DA may be invited to give an assessment regarding the state of agriculture in the country and present the plans of the department, including the proposal of the PCAFI.

“We can just ask the DA to brief us on the present situation including the recommendation from PCAFI. We’re here to help in any way we can,” Villanueva said.

Meanwhile, Poe said that a declaration of state of emergency on agriculture will only be viable if there is “absolute transparency on the steps to be taken,” such as an overhaul of the Bureau of Customs (BOC).

“The call to declare a state of emergency on the current food crisis is only viable if it comes with absolute transparency on the steps to be taken, as well as a much-needed overhaul on and the full digitalization of BOC system and processes — measures which are long overdue,” Poe said in a separate statement.

“We have had numerous declarations of a state of emergency and some had lasted longer than necessary. We must be careful with such declarations as some could use it to justify wanton importation and relaxation of controls on imported goods that will only further cripple the sector,” she added.

Poe stressed that the crisis on food security “did not happen overnight” and that it was brought by “those pushing for wider importation that disadvantaged local farmers and is a culmination of the worsening problems faced by the agricultural sector.”

Further, Poe said careful planning and long-term commitment is needed for the agriculture sector while ensuring that the government moves quickly so that no Filipino will be left hungry.

“We need a more permanent approach in the framework of the Right to Adequate Food — a bill which I have filed over and over again including in this Congress. This proposed measure seeks to establish a legal framework for the recognition and protection of the right to adequate food,” Poe said.

“We’re open to discussing possible solutions to this crisis with the new administration and I believe that the President personally taking the helm of the Department of Agriculture signifies just how important this crisis is,” she added.