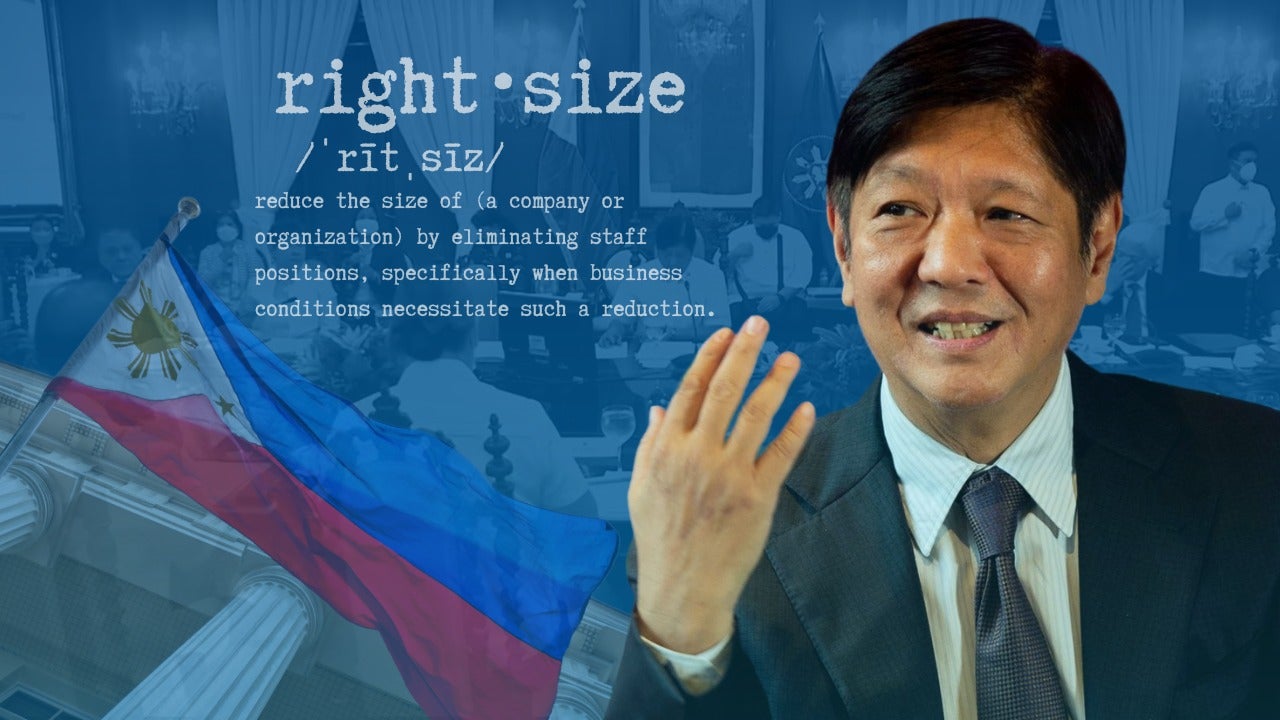 MANILA, Philippines — This July, under the first month of Ferdinand Marcos Jr. as the new head of state, a familiar buzzword re-emerged that was one of the most talked about proposals of previous administrations: “rightsizing.”

During the previous administration, former President Rodrigo Duterte repeatedly stated his intention — and even urged lawmakers on several occasions — to pass and implement the long-pending measure to empower the national government.

The proposal, a priority legislation of the Duterte administration, aims to eliminate redundant and overlapping functions in government.

Under the new administration, rightsizing has once again been the subject of discussion, following Marcos’ first order — to abolish the Presidential Anti-Corruption Commission (PACC) and the Office of the Cabinet Secretary.

“[In order to achieve simplicity, economy and efficiency in the bureaucracy without effecting disruptions in internal management and general governance, the administration shall streamline official processes and procedures by reorganizing the Office of the President proper and the various attached agencies and offices, and by abolishing duplicated and overlapping official functions,” Marcos’ Executive Order (EO) No. 1 stated.

Last July 8, Marcos’ economic team announced that it has revived the push to “rightsize” the bureaucracy to achieve the same goal as similar previous efforts—to expel redundant, ineffective, and inefficient government bodies

In this article, INQUIRER.net will explain more about “rightsizing,” the projected benefits and losses under the program, and its different faces and names under the leadership of the country’s former presidents. 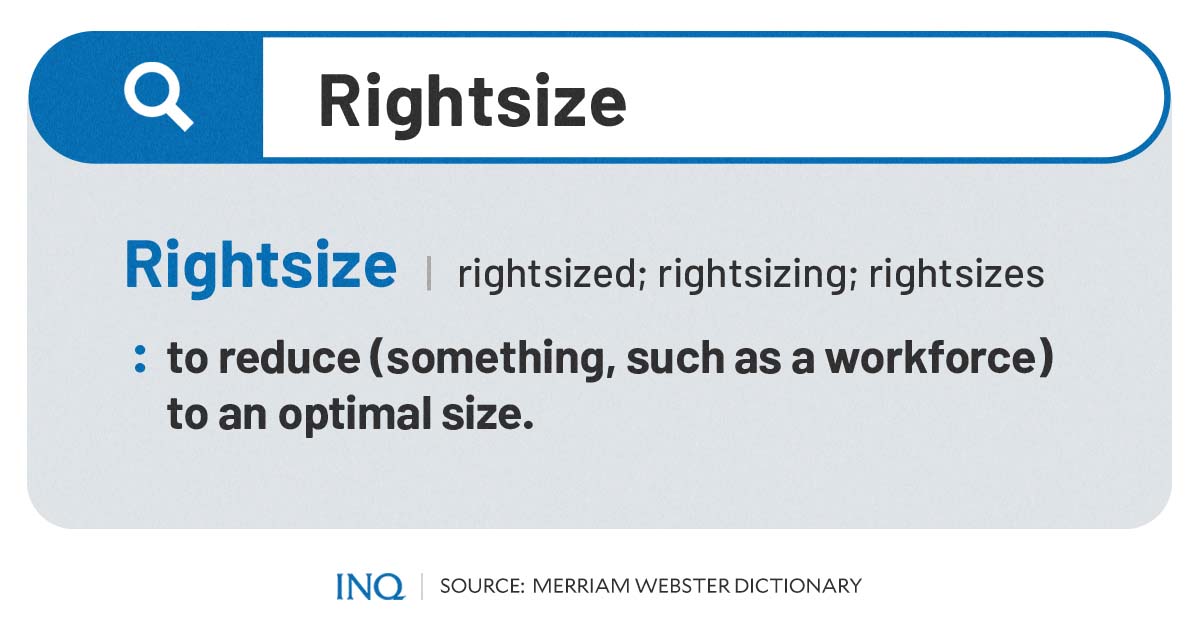 Although “resizing” is not a new term—in the context of government or government agencies—it is often misunderstood. Some people often confuse resizing to another familiar term: downsizing.

Downsizing means to reduce in size. It also refers to the permanent reduction of a company’s labor force through layoffs.

As opposed to downgrading, the Department of Budget and Management (DBM) has previously clarified that rightsizing is not about outright downsizing.

“Rather, it is designed to arrive at the appropriate structure and size of government agencies that will be responsive in the delivery of public goods and services in an effective and efficient manner, at the right time, and at the right cost,” said the DBM. 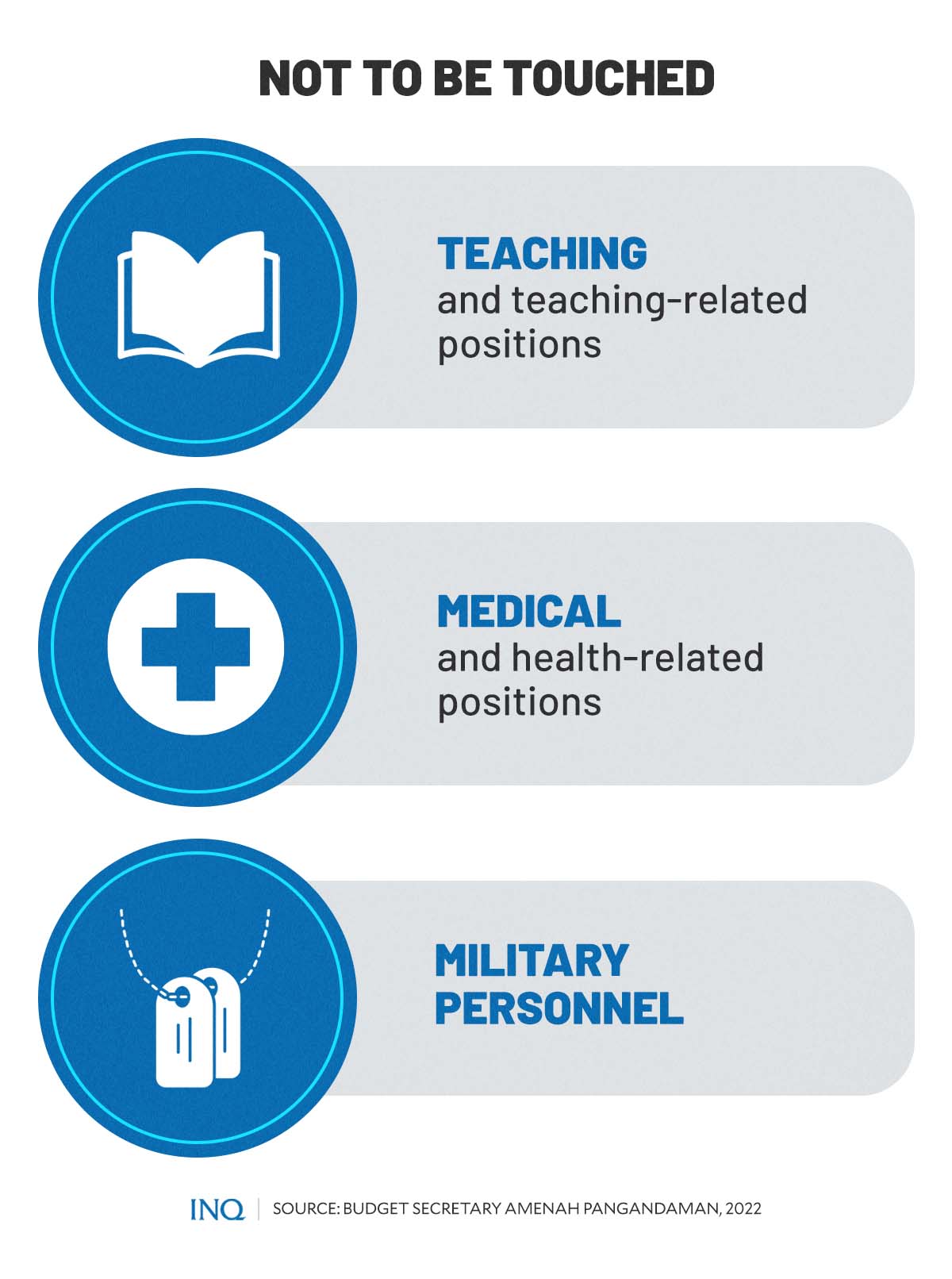 “The program is not about outright downsizing since agencies that will require additional resources to implement their respective priority programs and projects will be strengthened.” 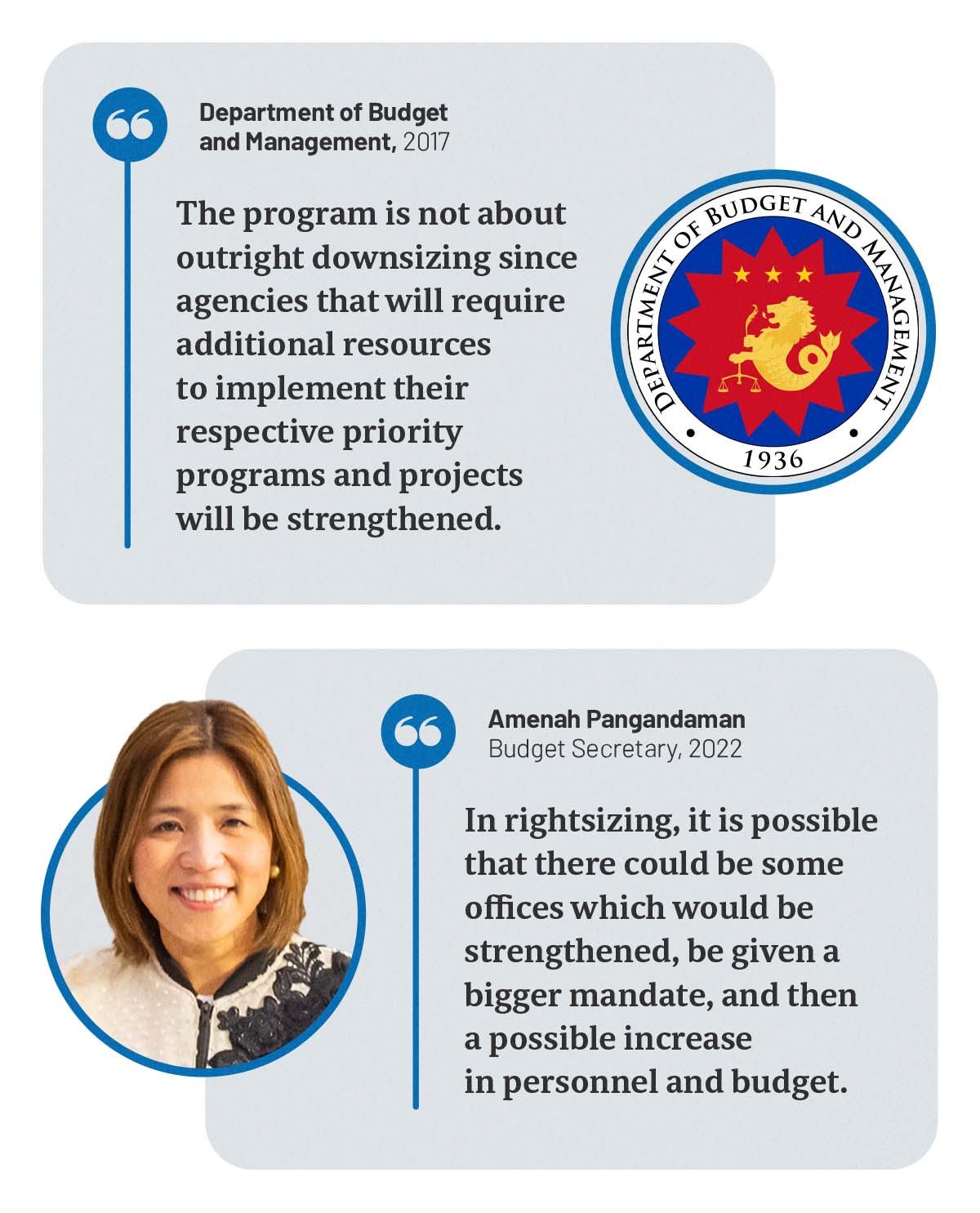 “In rightsizing, it is possible that there could be some offices which would be strengthened, be given a bigger mandate, and then a possible increase in personnel and budget,” said Pangandaman.

“The overarching objective of this is to have a smaller bureaucracy that is agile and responsive to modern times. In addition, this program will fix agencies that have repetitive functions or overlapping functions,” Pangandaman added.

She added that rightsizing the bureaucracy can help the government save funds and achieve “a lean, efficient, and responsive government workforce.”

Which agencies, who will take the blow?

According to the budget chief, the department has yet to identify which of the 187 government agencies and government-owned and controlled corporations (GOCCs)—with at least 2 million employees—could be merged, reorganized, or abolished.

She added that the plan covers some GOCCs not covered by Republic Act (RA) No. 10149 or the GOCC Governance Act of 2011.

Passed under late President Benigno Aquino III, the law was s envisioned not only to help GOCCs achieve fiscal responsibility and viability but, more importantly, to make them significant tools for economic development. 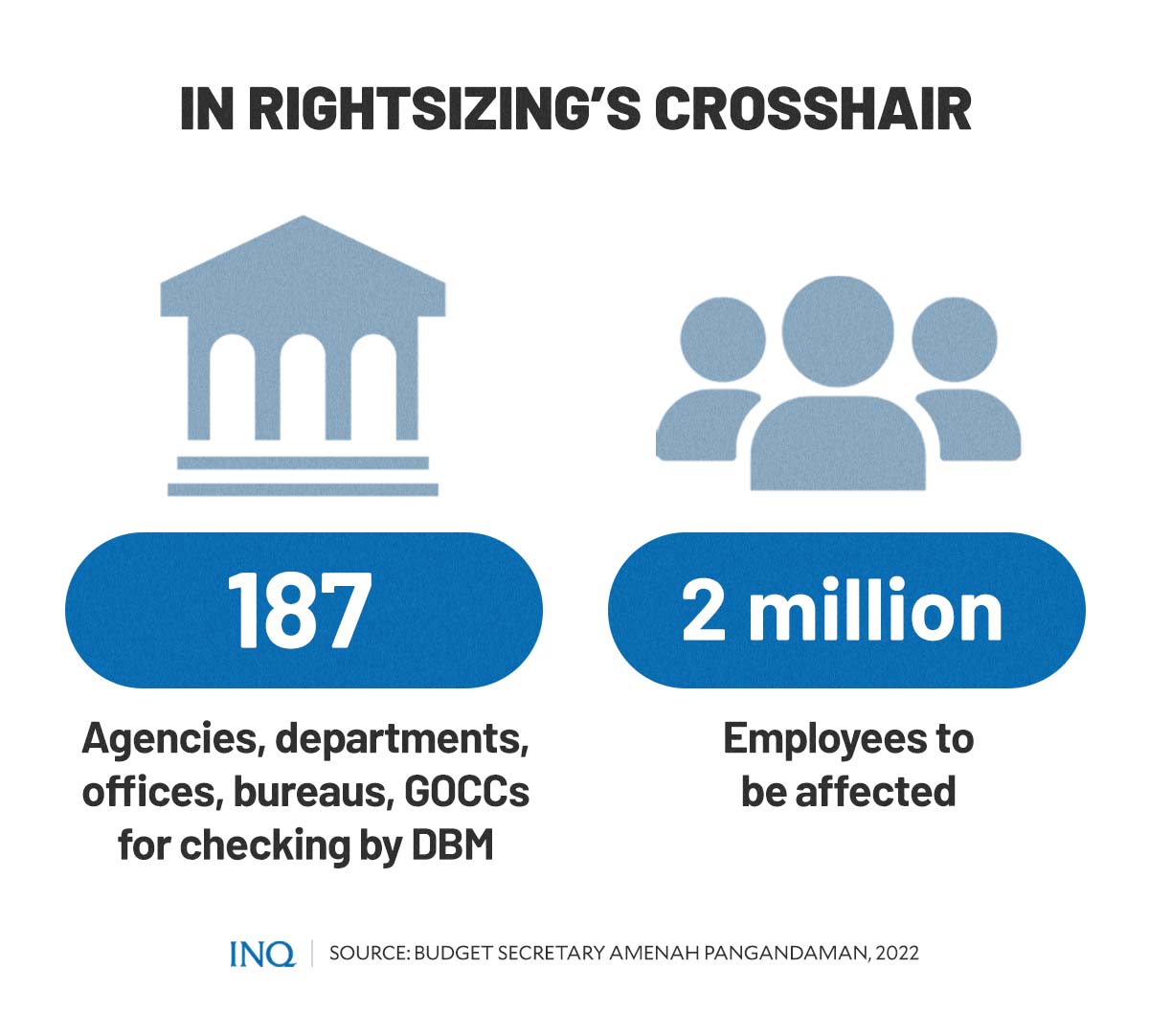 Government personnel and employees, who would be displaced or directly hit by the rightsizing, according to Pangandaman, may be transferred to the selected “upsized” agencies.

“Those who would be displaced from their works because their offices were reduced could be included in a pool wherein they can be retooled, retrained, and maybe we can put them in another agency which was upsized or straightened.”

“Affected personnel may apply to positions that will be created as an effect of the rightsizing. The government will also provide a retooling program for personnel so they may apply in vacant positions. Those who opt to retire will receive appropriate retirement benefits,” Pangandaman said. 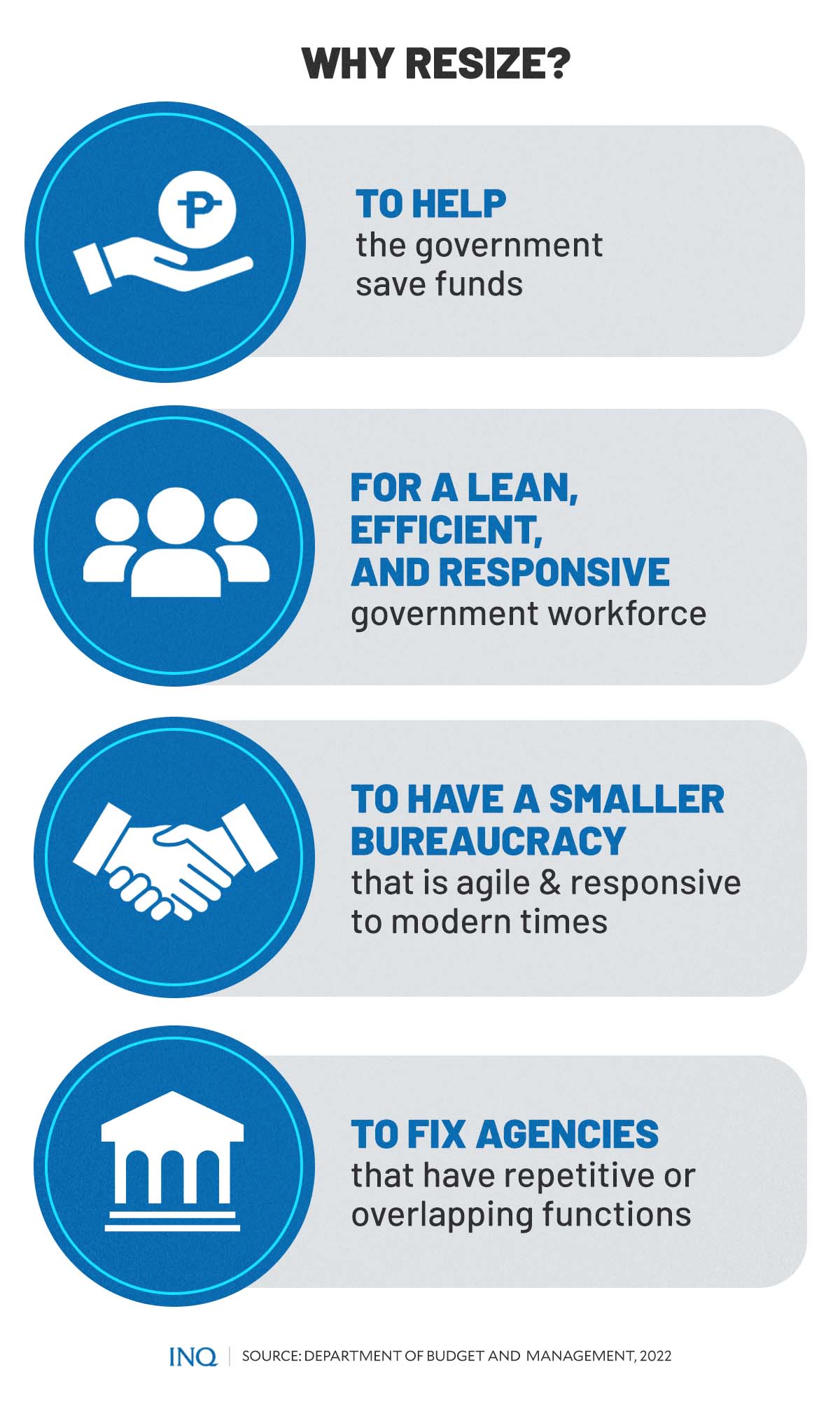 Meanwhile, those who will opt to retire will be given retirement benefits.

Money trail: Where will the saved money go?

How much will the government save through rightsizing? According to Pangandaman, the proposed rightsizing could save “a significant amount of budget.”

The budget chief explained that, for example, if at least 5 percent of the government agencies and GOCCs will be affected by the program, the government could save at least P14.8 billion per year from personnel services. 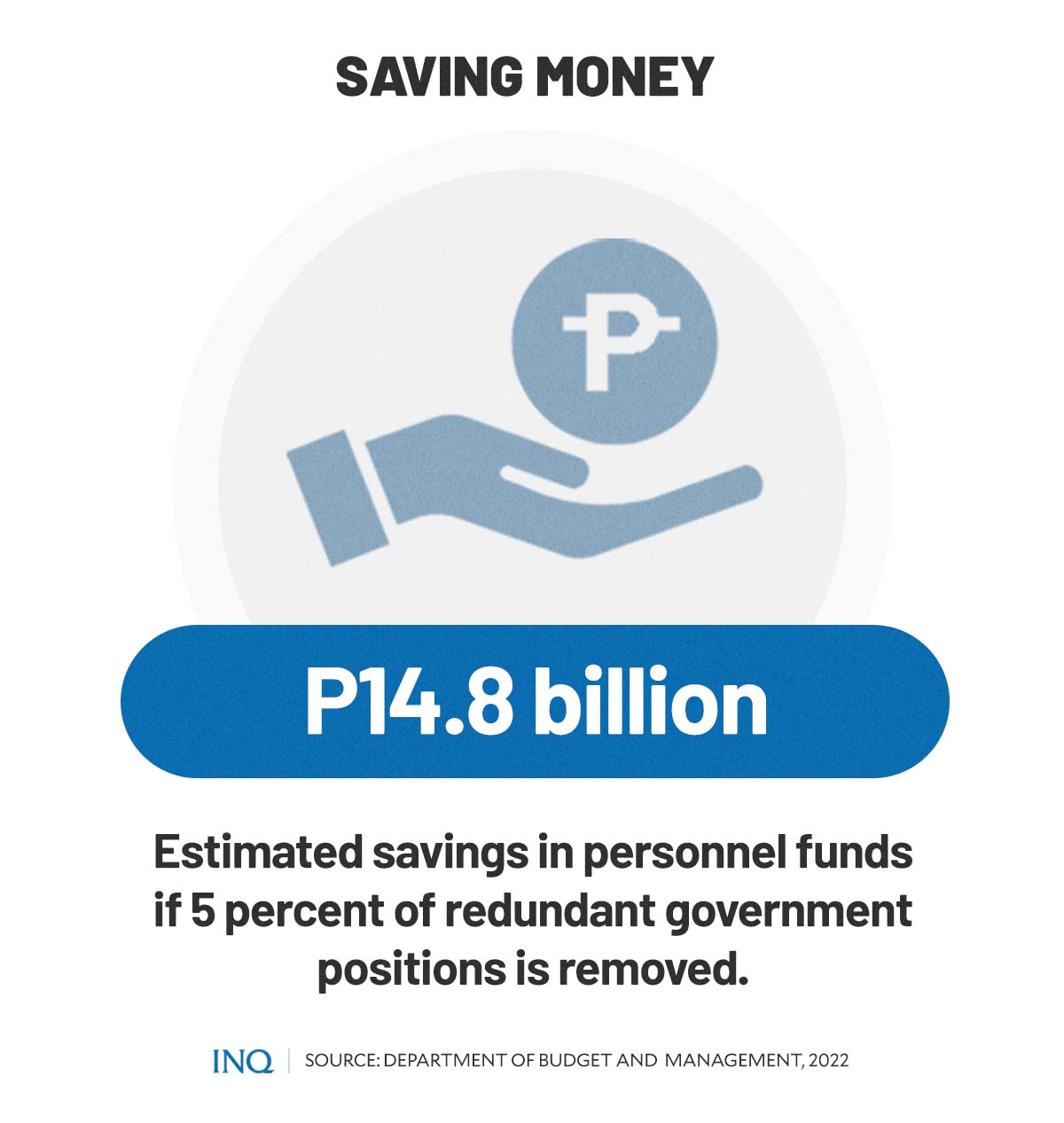 The amount that will be saved as a result of the implementation of the program will then be reallocated to fund programs in the infrastructure, social services, health, and agriculture sectors.

The budget chief said the bill to be pitched to Congress before Marcos’ State of the Nation Address (Sona) on July 24, will “give the President the power to study the bureaucracy, and review the mandate and functions of existing agencies.”

Once passed into law, the executive branch would set into motion a timeline to scrap, merge, or create government offices.

“The President has already instructed the Cabinet to look into their respective departments for possible rightsizing, and also for positions which have been rendered redundant by digitalization efforts,” Pangandaman said. 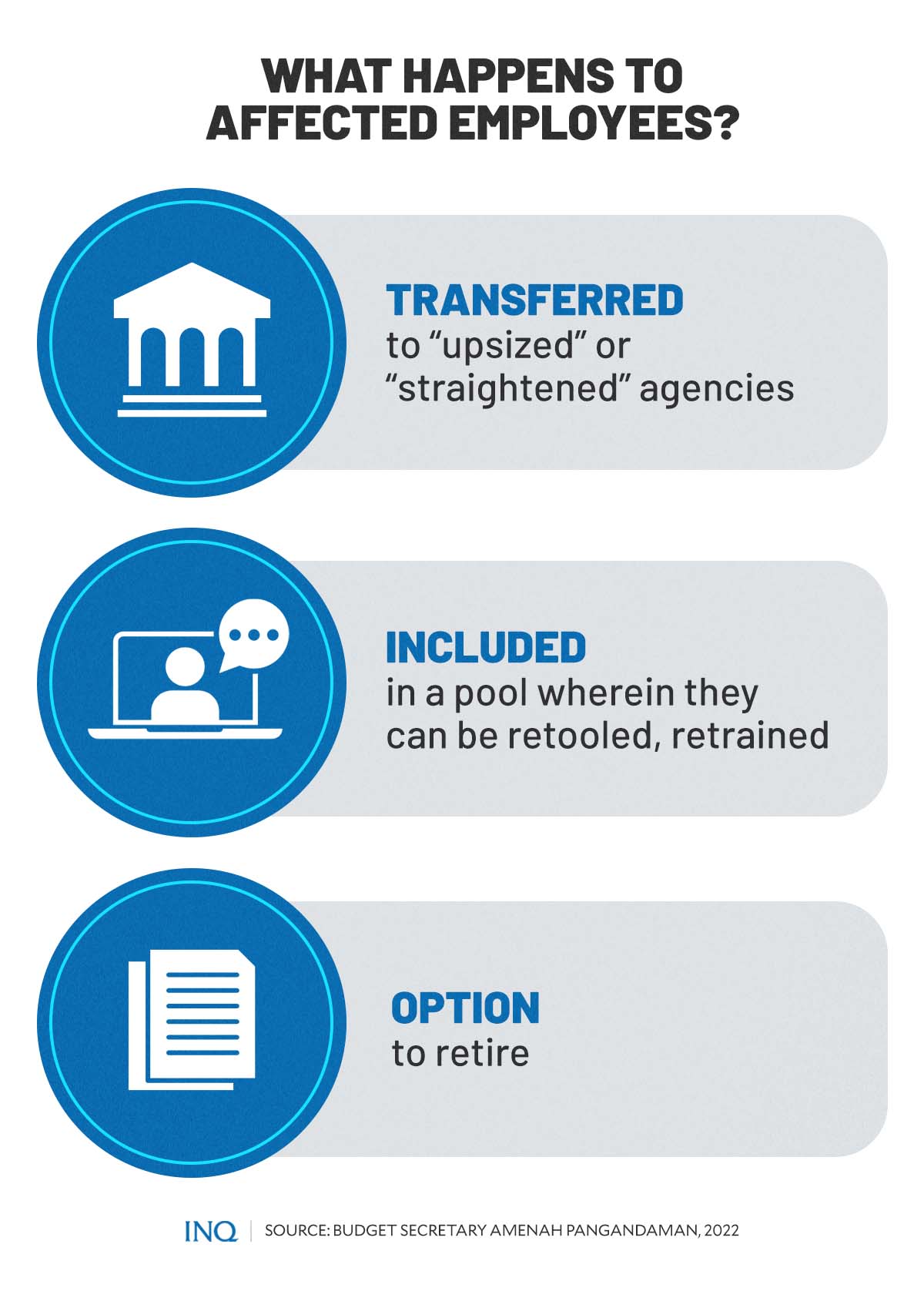 According to Finance Secretary Benjamin Diokno, the plan was to give the president authority within one year to rightsize the government.

However, abolishing government agencies would require Congress action, which would make it longer to rightsize through that method.

Reorganization reforms under past presidents

In a study—published as part of the NCPAG (National College of Public Administration and Governance) Working Papers—Nelin Estocado-Dulpina said the term rightsizing, along with terms such as streamlining, downsizing, and rationalization, are synonymous to reorganization.

The program is also not new, as previous presidents of the country have implemented reorganization reforms throughout their terms.

In the working paper “When Size Matters: A Study on the Rightsizing Act of the Duterte Administration,” Estocado-Dulpina—citing a separate study titled “Reorganizing the Administrative System: Groundworking, Planning and Legislation”—listed the following reorganization reforms passed by different Philippine presidents.

The list also included which government agencies and government branches were covered by the RA, EO, or House and Senate bills passed during each president’s term.