Saudi Arabia is said to be preparing to properly use its airspace for all commercial flights to and from Israel, and allow direct travel for Muslims participating in the annual hajj pilgrimage to Mecca, the holiest city in Islam.

Citing “people familiar with the matter, a CNN report on Wednesday said Riyadh was preparing to make the announcement this week, while US President Joe Biden visited the region with a most anticipated official state travel that will include a direct flight from Israel to Jeddah, Saudi Arabia on Friday.

Riyadh, CNN said, is expected to announce “that it will allow all commercial flights to and from Israel to use its airspace and allow Israel’s Muslim minority to take charter flights directly to Saudi Arabia to participate in Hajj. “

In an opinion article before the trip, Biden said the direct trip was a “small symbol” of the warming relationship between Israel and the Arab world and “steps towards normalization.”

Israel and Saudi Arabia have no official diplomatic relations, but secret ties have heated up in recent years as Riyahd and its de facto leader, Saudi Crown Prince Mohammed bin Salman, reportedly saw Israel as a strategic partner in the fight against Iranian influence. in the region.

The kingdom has refused to sign the Washington-brokered Abraham Accords in 2020 as expected by the US and Israel, but believes Riyadh has given the go-ahead to Bahrain, where it remains decisive influence, to join the normalization agreement with Israel. along with the United Arab Emirates and Morocco. 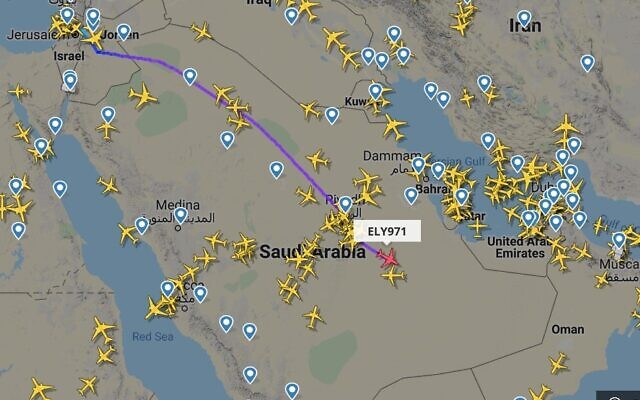 An El Al plane spotted on a flight tracking website as it made its first commercial flight between Israel and the United Arab Emirates, by crossing Saudi Arabian airspace, on August 31, 2020. (screen capture: FlightRadar24)

If Riyadh announces its approval for the use of its airspace, travel to and from those countries will be shorter journeys. 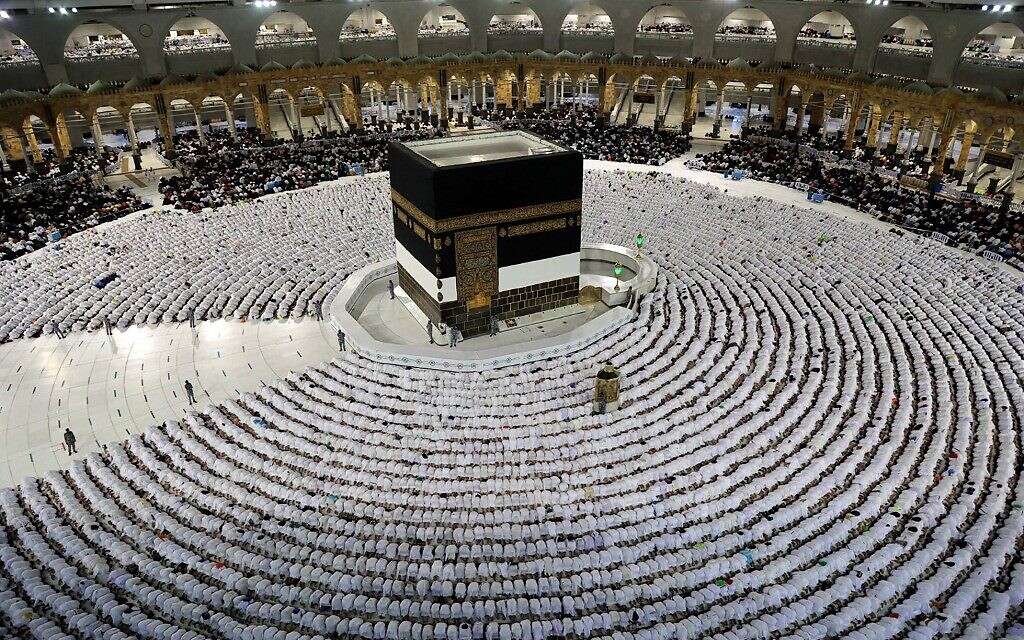 Muslims pray around the Kaaba at the Grand Mosque in Saudi Arabia’s holy city of Mecca on July 5, 2022 (AFP)

Hajj is a once-in-a-lifetime duty for all Muslims who are physically and financially able to make the journey, taking them on the path believed to have been traversed by Prophet Muhammad about 1,400 years ago.

Currently, Saudi Arabia accepts Muslim pilgrims coming from Israel to Mecca but requires them to travel to a third country, which Frej said could cost up to $ 11,500 for a week’s journey. Meanwhile, pilgrims from neighboring Arab countries pay almost half that amount.

The CNN report came amid swirling speculation about a potential normalization agreement between Israel and Saudi Arabia on Biden’s visit.

According to CNN, Biden administration officials said full normalization between Israel and Saudi Arabia is unlikely to occur in the near future, but claimed that cooperation between the countries is expanding.

“Our work will deepen the countries that have signed up and expand if we can,” CNN quoted a U.S. official as saying.

Biden arrived in Israel on Wednesday for the first of his two-day visit to the country, which included a reception ceremony at Ben-Gurion International Airport where the president said the relationship between “Israeli citizens and Americans are deep in the bone. ” 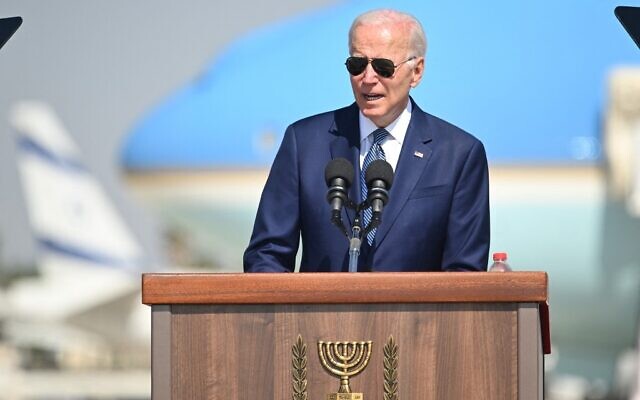 US President Joe Biden speaks to his hosts upon arrival in Israel at Ben Gurion Airport on July 13, 2022. (Mandel Ngan/AFP)

Biden will spend 48 hours in Israel and the West Bank with an itinerary that includes bilateral meetings with Israeli leaders, tours of Israel’s security systems and the Yad Vashem Holocaust memorial museum, attending the opening ceremony of the Maccabiah Jewish Olympics, a visit to a hospital for Palestinians in East Jerusalem and a meeting with Palestinian Authority President Mahmoud Abbas in Bethlehem.

He will then fly directly to Saudi Arabia to participate in a summit of leaders of the Arab region known as GCC+3 before returning to the US on Sunday.

This is Biden’s 10th trip to Israel. He used his remarks at the reception ceremony to commemorate his first visit before the Yom Kippur War in 1973 when Golda Meir was premier and former prime minister Yitzhak Rabin was one of his assistants.

“I realize that I had the great honor of being a part of this country’s great history,” he said, before reiterating another line he had on going to Israel. “I’ll say it again, you don’t have to be a Jew to be a Zionist.”

Notably Biden did not mention Iran in his statements, though he said that advancing Israel’s integration into the region would be the theme of the trip.

Tobias Siegal and Lazar Berman contributed to this report.

You are a dedicated reader

That’s why we started the Times of Israel ten years ago – to give understanding readers like you a must -read that covers Israel and the Jewish world.

So now we have a request. Unlike other news outlets, we don’t put up a paywall. But because the journalism we do is expensive, we invite readers where The Times of Israel has been important to help support our work by joining. The Community of the Israel Period.

For as little as $ 6 a month you can help support our high-quality journalism while enjoying The Times of Israel AD-LIBREas well as access exclusive content only available to members of the Times of Israel Community.

Thanks,
David Horovitz, Founding Editor of The Times of Israel