PPA: Connecting the Philippines as one maritime nation 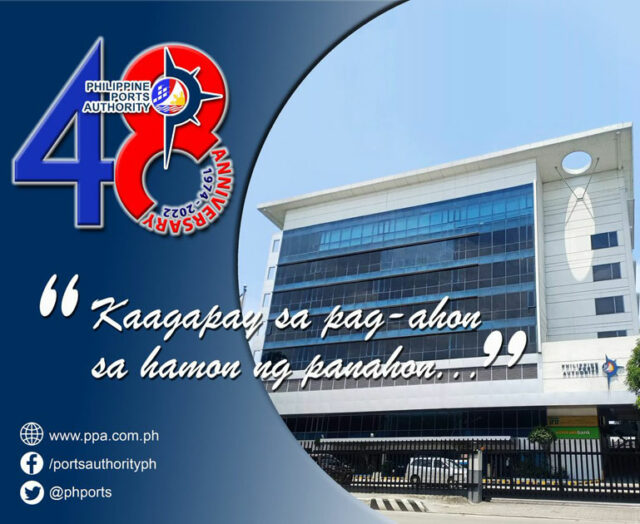 Let us go back in memory lane as we highlight the accomplishments of the agency leading to its status as one of the most successful Government-Owned and -Controlled Corporations as it continues to be a member of the ‘billionaires’ club in terms of dividend remittance.

While there is still a lot of work to be done, the realization of the plans and programs of the previous administration has prepared the PPA for years to come as the world recovers from the effect of the COVID-19 pandemic, and also as the PPA slowly transitions to the new administration.

In 2016, the PPA changed its mindset from top management down. This drastic paradigm shift was undertaken to implement change and improve the way PPA serves the public, the way the Authority carries out its projects, and raise the level of comfort and convenience it provides to the sea-traveling public.

From that time forward, PPA personnel slowly embraced and live the dreams and aspirations of the administration, thus, all other changes were very smoothly enforced.

This shift in outlook resulted in positive deviation across all aspects of operations of the agency and filled the first full year of the new leadership with great possibilities, anticipations, and enthusiasm.

Stepping Up The Pace

To continue the positive momentum, the PPA initiated another change in 2017, this time on the very symbol that represents the Authority, its Logo.

The reason behind the change is to integrate all aspects of port operations instead of focusing only on the core business of the agency.

Year 2017 was likewise the year, where the Golden Age of Infrastructure was ushered in.

With the even better performance of the agency for the year, PPA was even more encouraged in pursuing its plans and programs the following year.

If in 2017 the PPA implemented the change to PPA Logo, the year 2018 showed the launching of the new PPA logo, signaling the rebirth of the PPA, armed with renewed enthusiasm and eagerness to dispense unparalleled public service not only to the port users but to the entire nation.

Accomplishments abound the PPA for the year 2018 starting from the APSN Green Port Awards for the Ports of Batangas and Cagayan de Oro.

The Development Academy of the Philippines also recognized the PPA and PMO Misamis Oriental/CDO for fostering a Green Culture for Port Operations and Management under the Government Best Practice Recognition.

The awards were testaments to the initiatives of the PPA toward environmental protection. The Authority slowly reaped the benefits of its hard work particularly in complying with the stringent requirements on Environmental Management and Occupational Safety and Health.

During this period, the PPA also emphasized its workforce development, both Organic and Outsourced, by implementing a bridging program to uplift the competencies of existing personnel while giving its outsourced personnel equal opportunity to dangle an entry-level position provided, they possess the required eligibility requirements.

This year, the PPA injected some P3.3 billion for its infrastructure projects in support of the BBB initiative of the National Government.

Year 2019 was a milestone year for the PPA as it posted all-time highs in terms of shipcalls, passengers, cargo volumes, revenues, total taxes paid, and dividend remittance.

This kind of performance was due to the shift from manual to automated processes, installation of sophisticated, effective, and highly productive port equipment, compliance with the world’s best practices, and most especially the shift in the outlook of employees to public service with reliability, integrity, and accountability.

This enabled the PPA to help the government achieve its goal of giving comfortable lives to every Filipino not only through higher dividend remittances but also through efficient, effective, and fast delivery of port services to our stakeholders and port users.

During this period, the PPA invested P4.6 billion in its port projects, the biggest expense since 2010.

Year 2019 was also the second straight year that the PPA scored big in the annual port user satisfaction survey, particularly on the aspect of integrity. With a satisfaction rating of 4.43 or equivalent to Very Satisfactory on top of its port facilities and services rendered.

Undeniably, 2019 was a banner year for the Authority.

Year 2020 was an upbeat year for PPA hoping to overshadow its performance from the preceding year until it hit a hump: the COVID-19 pandemic.

Nonetheless, PPA wasted no time and immediately mobilized its personnel and other resources to help the government respond properly to the health emergency initially by remitting in advance its dividend worth about P5 billion, which is 7.5% higher than the regular 50% required by law.

Despite the pandemic, PPA made sure that all ports remained open to handle the processing and delivery of cargoes, particularly essential products, to the rest of the country and to the country’s foreign trading partners while establishing the needed border controls as well as safety, security, and travel protocols to prevent any sustained COVID-19 transmission in any PPA port.

In cooperation with the private sector, led by the Lopez Group of Companies, the PPA established two COVID-19 recovery facilities, the first one in the Manila South Harbor in April 2020 and in Port Capinpin in Bataan in October of the same year. These amenities also served as quarantine facilities for on-signer and off-signer seafarers since the two ports were also declared as dedicated crew change hubs and guaranteed the movement of seafarers manning the international fleet. Eventually, several more ports under the auspices of PPA like Batangas and Davao were declared as additional crew change hubs.

PPA likewise granted Financial Assistance for the Critically Impacted Sector in line with RA No. 11494 or the Bayanihan to Recover as One Act as well as waived and/or reduced Port Fees and charges in consonance with the Hatid-Tulong Program of the Office of the President for Locally Stranded Individuals.

Several more initiatives were undertaken to show the bayanihan spirit between and among the PPA PMOs and help not only its affected personnel but also its nearby communities.

PPA was also able to complete more than 27 port projects despite the pandemic without any transmission or casualty due to COVID-19.

The pandemic, however, affected its volumes and revenues. Nonetheless, PPA saw an opportunity to work together with the government and improve its services given to the public.

The speed bump, it slowed down the Authority to get a 2020 vision of the future. With all the experiences from the pandemic, the PPA was prepared more than ever to face the new normal and sustain the progress with the end goal of giving Filipinos comfortable and convenient lives.

The rebound from the pandemic. The PPA remained undeterred to move forward to deliver its contribution to the advocacies of the Government.

Recognizing the things that still needed to be done to provide seamless connectivity between and among the islands, the PPA prepared a plan to ensure that PPA ports are ready for the transition and ready for the future when nations are expected to recover from the adverse effects of the global health emergency.

PPA also revised its mission-vision statements and calibrated its core values to guide the PPA until 2030.

PPA also upped the ante by remitting at least 60% of its net income to national coffers.

In terms of infrastructure, the PPA completed 248 seaport development projects, which formed part of the total 586 seaport projects completed under the Build-Build-Build program of the Duterte Administration.

In fact, at least seven seaport projects can be inaugurated by the new administration in its first 100 days in office.