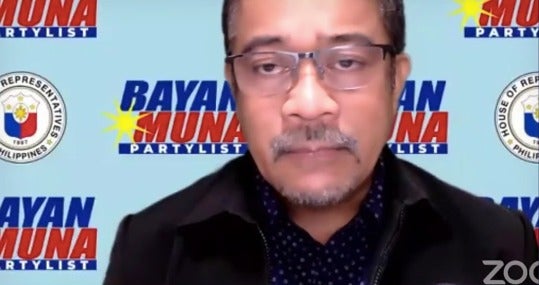 MANILA, Philippines — Proposals to impose taxes on online streaming products such as Spotify and Netflix must be junked as they would only affect poor and middle-class customers who are using these sites as a form of entertainment, activist group Bayan Muna said.

In a statement, former Bayan Muna lawmaker Carlos Zarate said that the latest suggestion on taxation contradicts stay-at-home policies, as forms of entertainment either face taxation or closure, such as ABS-CBN’s television and radio networks.

Instead of taxing these items to generate income for the government, the former congressman reiterated their old proposal to tax the rich or impose a one percent wealth tax on every million earned by the country’s richest individuals, families, or corporations.

READ: Makabayan bloc wants ‘wealth tax’ for people with over P1-B worth of assets

(They told us before to stay at home because of COVID, but almost everything we can do at home has been taxed or shut down, like the closure of ABS-CBN before and the planned taxation of Netflix, Spotify, Facebook, Google, Cloud, and other online providers.)

Zarate’s remarks were a reaction to Finance Secretary Benjamin Diokno’s pronouncement on Friday that the Department of Finance is looking at deriving tax from single-use plastics and online purchases like subscriptions to Netflix and Spotify.

This is meant to generate more income for the government. However, according to Diokno, paying taxes for online purchases is only correct as taxes are incorporated on physical products.

Zarate said that even if the government promises to impose taxes on the owners of the streaming services, the companies would then pass on the additional expenses to their customers.

He also claimed that it is ironic for the government to push taxation on the poor and middle class while seemingly providing leeway for companies through the Corporate Recovery and Tax Incentives for Enterprises (CREATE) Law, which gives fiscal relief for local and foreign corporations hit by the COVID-19 pandemic.

“Also, even the claim that it is the foreign company that is being taxed is specious as it is still the consumers who will foot the bill in the end since VAT is a pass-on tax – it would mean higher subscription fees, service charges, and, even prices of online products. That is why this tax is anti-consumer,” he said.

“It is tragically ironic that the government wants to tax the poor more, but it rushed the passage of the CREATE that that would lower the income tax rate of corporations and the rich and will result [in] an estimated P259B revenue loss for the government until 2022,” he added. — With reports from Andy Hoo, INQUIRER.net trainee