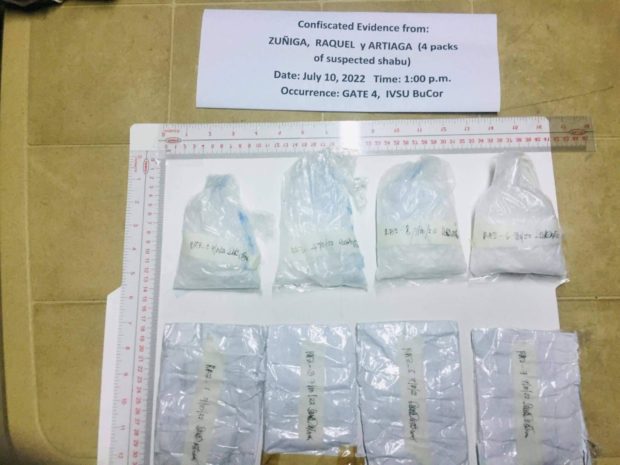 MANILA, Philippines — At least 350 grams of suspected crystal meth or shabu estimated P2.38 million was seized from a woman who tried to sneak the illegal substance inside the National Bilibid Prison, the Southern Police District (SPD) reported Monday.

SPD director Brig. Gen. Jimili Macaraeg said the suspect, who was identified as certain Raquel Zuñiga, 33, of Tatalon, Quezon City, was arrested after the Inmate Visitation Service Unit (IVSU) of Bureau of Correction (BuCor) conducted a body-search of all inmates and visitors at the Maximum Security Compound on Sunday noon.

Police said they are already preparing a complaint against the suspect for violating Section 11 Article II of Republic Act No. 9165 in the Prosecutor’s Office.

Furthermore, Macaraeg said that the seizure of the illegal substance is an example of the coordination between SPD and BuCor, along with the Bureau of Jail Management and Penology to ensure detention cells and facilities are free from drugs.

“The campaign on illegal drugs is our top priority. We will continue our partnerships with the BJMP and BuCor to strengthen our drive to prevent all opportunities for traffickers to continue peddling drugs,” Macaraeg said. —With reports from Nicole Faye Agcaoili, INQUIRER.net trainee