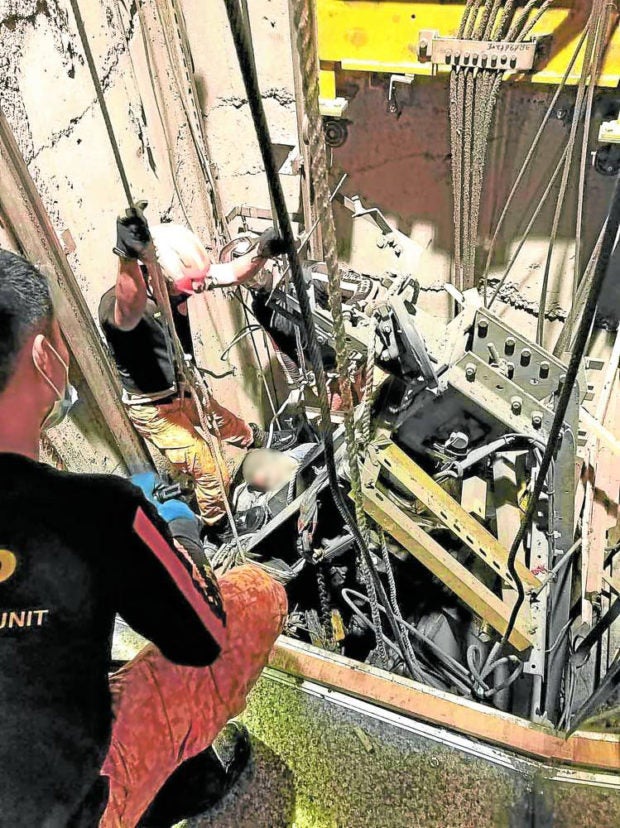 FREE FALL An elevator repairman looks at what remained of the elevator after it fell from the 38th floor to the ground while being dismantled. PHOTO FROM BUREAU OF FIRE PROTECTION-MAKATI

MANILA, Philippines — The local government of Makati City on Monday issued an order suspending all elevator repairs in a building where two men were killed when an elevator crashed on July 8.

Makati City spokesperson Atty. Michael Camiña said this in a statement after delivering condolences to the families of Manuel Linayao and Rey Miguel Gilera, the two elevator installers who were killed in the accident.

“Mayor Abby Binay has ordered the Office of the Building Official (OBO) to closely coordinate with the Makati Police in the investigation of the case,” said Camiña.

“All elevator repair works at the said building have been suspended until such time that the OBO lifts the suspension upon the contractor’s full compliance with safety protocols,” he added.

The city hall also ordered the management of the building and its contractor to give their full cooperation in the ongoing investigation.

Camiña also assured that his office would soon decide who would be liable for the incident.

He also reiterated the city’s commitment to the safety of all citizens of Makati, including employees and clients of corporate offices and establishments in the city.

Apart from the two fatalities, two others were also injured.

According to a report from the Southern Police District, an elevator car fell from the 38th floor to the basement of the building, hitting and killing Linayao and Gilera, who were fixing an elevator on the 6th floor, and wounding two other unidentified installers.