Uncertainty over the UK’s political direction following Boris Johnson’s resignation last week is worrying construction firms and could affect the sector in the months – or possibly years – to come, according to industry leaders.

Fears that a new leader could focus on short-term fixes to alleviate the cost of living crisis by cutting taxes, reducing infrastructure spending and abandoning net zero targets mean that construction is faced with the frantic wait for a new prime minister to be appointed. Leadership elections are underway and Johnson has appointed a temporary cabinet, but he has told its members that he will not implement any new rules during his remaining time in office. 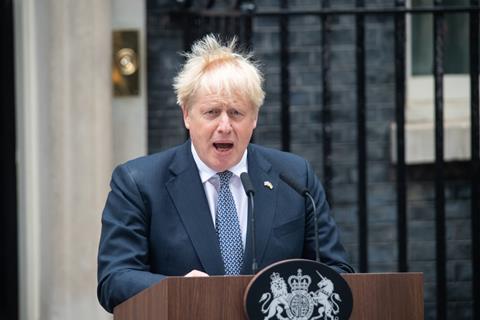 “We had the first round of leveling up the funding allocated, but when that really went into the schemes, the planning would go to a little break, awaiting policy decisions on local plans and how the leveling up bill can be implemented. ”

He said major infrastructure decisions, including the government’s hospital construction program, could also be delayed, even until the new government is established.

The leadership election will also strengthen voices within the Conservative party that want to turn away from net zero promises. Leadership candidate Suella Braverman, the attorney general, said the government should “suspend altogether the desire to achieve net zero by 2050”. He said the policy would result in “net zero growth”.

Braverman has the support of backbench MP Steve Baker, who said he wants to dismantle Johnson’s net zero policies. Baker is a member of the Net Zero Scrutiny Group, a group of Conservative MPs who oppose the government’s climate policy agenda.

Only a handful of leadership dependents are explicitly committed to the net zero timeline, including Sajid Javid and Jeremy Hunt. International environment minister Zac Goldsmith and former science minister Chris Skidmore warned the Sunday Telegraph that many contenders are maintaining a “frightening silence” on the issue.

Louise Hutchins, head of policy and public affairs at the UK Green Building Council, said the abandonment of climate targets would be “very short-sighted”. He added: “Any new PM needs to get the support of the country, not just a minority of backbenchers, and there is clear, consistent support for climate action across the country, in all sections of society.”

Hutchins said green policies are the answer to the economic and social crises facing the country. “From an industry perspective, we clearly need to see the political and policy signs to give business confidence to invest, and we need its investments to grow the economy to help get us out of this economic crisis. ,” he says.

Alasdair Reisner, chief executive of the Civil Engineering Contractors Association, feared the potential impact on the industry of having a “government without government” in the next few weeks. “Inevitably, there will be a distraction of a leadership election, so ministers have more to look at there than what is going on in their department. I’m worried we might see a slowdown in activity, ”he said.

The huge wave of ministerial resignations that preceded Johnson’s decision to quit only added confusion to what the government could achieve in the coming weeks. A new chancellor, housing minister and secretary of state for leveling up, housing and communities were in place but, when the Building hit, there was no confirmation as to which minister was responsible for the construction industry. Lee Rowley resigned as construction minister last week.

In addition, Stephen Greenhalgh, the building safety minister, stepped down on Friday, 24 hours after Johnson resigned. A central figure in the implementation of the Building Safety Act, he said he was “saddened by the turn of events” that led to Johnson’s decision and he is following suit “now that the die has been thrown”.

Stephen Marcos Jones, CEO of the Association for Consultancy and Engineering, said: “Now is not a good time for more political uncertainty in Westminster. The conflict in Ukraine, rising inflation, as well as the collapse of political commitment to a raft of ministers no longer in the role – including the construction minister – have the potential to affect business confidence and investment decisions, and delay our recovery after the pandemic. . ”